PhotoFiler is a utility which extends the display abilities of the RISC OS Filer, turning it into an image thumbnailing tool.

When PhotoFiler is loaded, Sprites, JPEGs and DrawFiles can be shown in miniature in place of their usual file type icon. This is very useful for organising collections of bitmap and clip-art images, as it allows rapid identification of images.

It can also integrate with ImageFS and the ArtWorks renderer modules.

In addition to thumbnailing, it also allows you to define your own directory sprites and remove the pling (‘!’) character from the display of application names.

PhotoFiler requires RISC OS 3.6 or later (RISC OS 3.5 is supported, if the SpriteExtend 0.99 and DrawFile 1.30 modules are available.)

This version is a new release as freeware with the source code included. 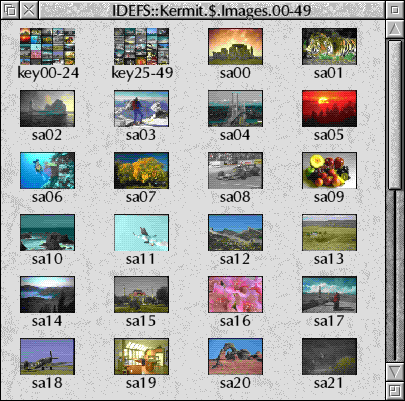 PhotoFiler is shown here displaying the contents of the JPEG images directory, as supplied with RISC OS 3.5 and later. 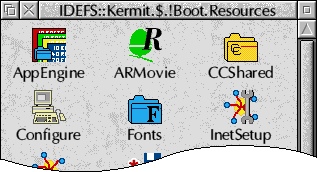 Here the “Hide plings” feature is used to remove the ‘!’ character from the start of application names, giving a neater looking display. 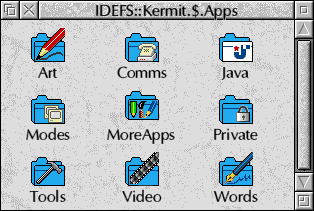 An example of a typical directory enhanced with custom directory sprites. Sprites can be defined for each of the four possible states; selected, unselected, open and closed.

PhotoFiler can also be installed via PackMan.

Zappo wrote FilerPro which was a complete replacement for the RISC OS Filer. One of its numerous features was that it allowed image and movie formats to be thumbnailed with an extensible system of modules.

Gerph wrote JFFilerPro, which used FilerPro’s thumbnailing modules to add thumbnail support to the native Filer. It crashed a lot, but was so nifty that I reimplemented the entire lot from scratch as PhotoFiler.